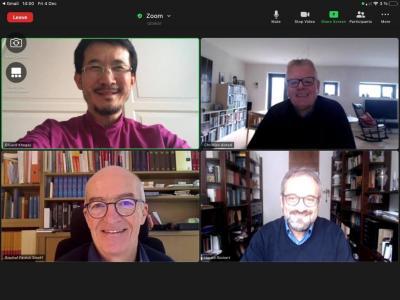 The three European Central Conferences of The United Methodist Church covering 32 countries and 10 time-zones are making plans for the future.
It may include separation, re-organization and the re-drawing of the United Methodist map of Europe.

As the church at its upcoming General Conference in late summer of 2022 will consider plans that open the door for central conferences, annual conferences and local churches to leave the denomination to form or to unite with a new Methodist denomination, the four bishops Eduard Khegay, Harald Rückert, Patrick Streiff and Christian Alsted have found it prudent to initiate conversations about potential implications of a separation and processes to lead the church through this time into a vital and sustainable future.

Read the documents in this order: A. Europe CC Future B. Europe CC-TF mandate C. Europe CC-Separation. The documents will be discussed in different forums in the annual conferences. The Central Conference Council will collect feed back.

Some annual conferences in Europe have already indicated that they plan to leave should the current polity on human sexuality change and open the door for same-sex marriages and the ordination of self-avowing practicing homosexuals. Some annual conferences are still considering their situation, awaiting the decisions by General Conference to have a fuller perspective to inform their decision. Several annual conferences have indicated that they wish to maintain the unity in a future United Methodist Church that will be composed of persons and conferences that wish to be inclusive of all people and remove restrictive language from the Discipline, as well as inclusive of those who will keep their traditional conviction.

Patrick Streiff, the resident bishop of the Central and Southern Europe episcopal area emphasizes “how diverse the context for the mission of the church is related to State legislation, dominant Christian church or Muslim faith, and many other issues, and that the episcopal area is composed of United Methodists who – in good faith – read and understand the Bible differently concerning same-sex relationships, even if they believe all in Christ Jesus as their Lord and Savior.”

“We cannot just sit on our hands and wait until after General Conference has acted”, says Christian Alsted, resident bishop of the diverse Nordic and Baltic episcopal area, “we need to think and prepare proactively for the future and work for as much unity and missional strength as possible, while we ensure that all local churches, clergy and annual conferences are able to live into the future with integrity.”

Eduard Khegay, the resident bishop of the Eurasia episcopal area, expresses his lament that his “beloved worldwide United Methodist Church may separate. But when the leaders of the Council of Bishops and representatives of the UMC caucuses groups proposed the Protocol on Reconciliation and Grace through Separation, I realized that this might be our only alternative. If the Protocol is adopted by the General Conference, I envision myself and Eurasia episcopal area to go with the traditional understanding of marriage and ordination as it is stated in the present Book of Discipline of the United Methodist Church.”

“It is a very strong signal that our three central conferences in Europe seek to move forward together”, Harald Rückert, the resident bishop of Germany emphasizes. “In spite of different opinions within our central and annual conferences and in spite of possible different decisions on our ways into the future, we attempt to have honest and respectful, courageous and future-oriented conversation. I am grateful for the broad European-Methodist perspective and connectional understanding of the members of our executive committees.”